We visit the Cochrane Ecological Institute who are responsible for one of the most successful conservation projects in the world.

For the past 50 years, the family-run Cochrane Ecological Institute has worked tirelessly to conserve some of Canada’s most vulnerable endangered species. Watch Mazda’s exclusive film to discover more.

Just 20 minutes’ drive north of Cochrane, Alberta, Canada, we turn our Mazda CX-30 off the main road, down a long, winding track towards a cluster of wooden buildings. None is unusual for the area. But this is no ordinary place. It’s the home of the Cochrane Ecological Institute (CEI), which is responsible for one of the most successful conservation stories in the world—bringing the swift fox back from near extinction in North America.

Sadly, this endearing little creature, no bigger than a domestic cat, had become the victim of predator population control aimed at keeping down numbers of grey wolf and coyote. In addition, land was sold off for development, so there was nowhere for the animal to go. But thanks to the CEI’s captive breeding program, which began six years before the swift fox was extirpated in Canada, it now roams the plains of Alberta and Saskatchewan, and numbers rose in the US.

“We partnered with the Blackfoot Confederacy in the States and had a 75 percent survival rate over four years,” says Clio Smeeton, president of the CEI, proudly. “But because we were so successful, in 2010 the government of Montana opened the commercial trapping season for the swift fox. Thankfully, it’s a sacred animal for the Blackfoot and trapping isn’t allowed on tribal lands.”

The CEI was founded in 1971 by Clio’s parents, Miles and Beryl Smeeton. The charitable organization is not the family’s only remarkable achievement. Miles and Beryl were pioneers who climbed mountains and circumnavigated the globe several times.

It was while the young Clio was sailing the world that she learned to recognize whales from mere glimpses. But she discovered that her fellow sailors “hadn’t a clue what they were looking at. It was weird,” she recalls. “I looked at guidebooks and there were just pictures of whales. But you don’t see the whole whale when you’re on the deck of a boat. You see the fin or the way it blows. There are a lot of identifying things even if you only see a bit of it.” In 1988, Clio, who had studied at Saint Martin’s School of Art in London, gave her sketches to the organisers of a transatlantic race from Plymouth to Rhode Island and asked that the entrants record any whale sightings.

The organizers agreed to this plan—and stipulated that the race would not be considered finished until all the forms were completed. This led to the production of a practical whale identification manual which is still used to this day. Developing non-intrusive methods of identification, tracking and counting wildlife is a core CEI mission. As Clio explains, “if one black bear is seen by 15 people it might be counted as 15 when there is only one. So you get false numbers, which is a big problem with all species population evaluations. In North America there are more than 600 species on the endangered list, so it shows that current methods of wildlife management don’t work.”

Orphaned baby animals find a home at the CEI until they’re ready to return to the wild.

Miles and Beryl Smeeton at work on the nature reserve they founded in 1971.

The family-run organization has always been an important part of Clio Smeeton’s life.

The CEI welcomes all creatures, from the smallest to the largest.

To tackle this problem, Ken Weagle, director of the CEI (and Clio’s husband) works on devising methodologies and practical applications. With Duke University, he is developing a database of bear footprints, which are unique, like human fingerprints. And with the Southern Alberta Institute of Technology (SAIT) he is looking into ways to identify, track and count wildlife using drones and artificial intelligence. Non-intrusive research that doesn’t affect animals’ natural behavior is essential, as Ken explains: “To avoid predators, lynx climb trees, but collars get caught on the branches, so they’re trapped.”

The CEI hosts international students each year, too. Marlene Klepatz from Germany is studying Animal Management at the Van Hall Larenstein University of Applied Sciences in Leeuwarden, Netherlands and is spending five months at the CEI compiling a compendium of non-intrusive wildlife monitoring techniques. The students also help with daily tasks, including rescuing injured and orphaned wildlife from all over the province, from birds to skunks to bears. The animals are rehabilitated on site until they are ready to be released. However, the latter can prove easier said than done. “Looking for areas that match habitat requirements and where there will be the least wildlife-human interaction is the difficult part,” says Ken.

Perhaps surprisingly, two sites that regularly provide homes for the recovered animals are an oil and gas company and the Canadian Air Force. Both are uniquely placed to help, as they have “millions of acres of land they control access to where there are no people.”

Rewilding animals and birds takes an enormous amount of coordinating with multiple organizations, as well as the federal and provincial governments. But there is no doubting the CEI’s phenomenal success. As Marlene says: “The CEI is where ideas become reality.” 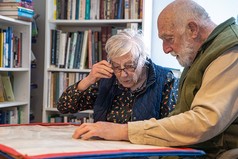 The CEI delivers the essential care and rearing necessary to return rescued animals to the wild. Many people, including vets, volunteer their services for free, but there are multiple costs associated with the maintenance and upkeep of the site, feed, medicines, and so on. Please help support the important work of the CEI by donating to ceiwildlife.org

Take the road less travelled in the Mazda CX-30 with available i-Activ AWD and Skyactiv-G 2.5 Turbo

Mazda embraces the Japanese environmental philosophy of Mottainai… will you too?